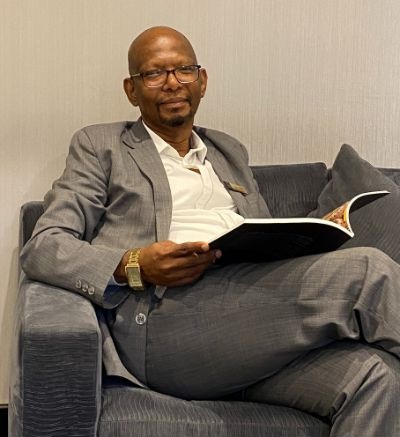 Rapula is one of Sun International’s most experienced assets

Rapula Modikwane thought he had taken early retirement until he was called by an old contact in 2019 who knew his many years of experience in the hotel industry would be an asset to The Maslow Hotel in Sandton.

He joined the garden oasis hotel as assistant restaurant manager and is now Food and Beverage Manager, having affected a service turnaround using his experience garnered locally and abroad.

Born in Kagiso in Krugersdorp in 1963, Modikwane matriculated and found employment in a Rustenberg factory, as his family had no money to send him to university. In 1985 he went with a friend to Sun City and joined the queues of people looking for employment. “I was one of a few with a matric certificate and was taken aside and quizzed on what my hobbies were, and what I did in my spare time.”  Modikwane was hired as a docket runner, in an age before computers. “I collected slips from restaurants and bars and took them to the reception, where they were filed for guests to pay before they checked out.”

Showing a keen aptitude for work, Modikwane requested help to study and was chosen, in 1990, to go to the Institute of Hotel and Tourism Management in Austria, where he lived for two and a half years while completing a hotel management Diploma with distinction.

Upon his return to South Africa, he completed an internship at a hotel within the Sun International group before re-joining The Palace at Sun City as Restaurant Manager. The hotel had opened the previous year and Modikwane recalls this time as its ‘glory days’. “We served 1 500 covers for breakfast – on a quiet day it would be 700,” he said. Some of the celebrities he served include Michael Jackson, Whitney Houston, Luciano Pavarotti and Peter Gabriel.

The father of two spent almost a decade as a lecturer in food and beverage at the Mafikeng Hotel School, completing a National certificate in business management through UNISA during this time. Last year, he studied a Project Management course through Wits University.

Returning to practice what he was preaching to students, Modikwane then worked as resort manager and general manager at several lodges and hotels around the country. When he was retrenched in 2018, he was happy to relax at home with his wife and watch some of his favourite TV shows, which include reality TV shows like The Great British Bake Off, Chopped and Judge Judy. “In 2019, Herman Swart, General Manager of The Maslow and my favourite mentor and former manager, called me up to give his team a hand in the hotel’s Food & Beverage Department, and I’ve been there ever since.”

Modikwane put his business turnaround skills to work and is happy to report that The Maslow’s food and beverage department is a tightly run ship. “If you visited last year and again now, you will see how much the service has improved, we get good guest reviews. Where we have negative reviews, we deal with them immediately.”

The pandemic, combined with social media and television has changed guest’s dining preferences, he said. “When you cater for many guests, you need to anticipate the unknown – the way you handle anything must be hygienic. People changed their diets due different reasons, for example: almond milk, soya milk or pescatarian dishes - just to name a few are now in demand”.

Due to Covid-19 affecting business negatively, the hotel introduced some activations to boost revenue, such as romantic date nights where a butler is on hand to serve guests during their stay. Located in the heart of the Sandton business district, The Maslow was always a popular conferencing destination, and Modikwane said that business had picked up over the past six months with groups from 30 to over 100.

During his career at a property outside of the Sun International group, he assisted five front office workers and five community members to be sponsored to study lodge management in Graaff Reinet Hotel School. “Upon completion, service delivery at the lodge improved and for the first time in 10 years, the lodge made a good profit and received a clean audit report from AG (Auditor General)”. “I would like to think that I have a passion for helping and uplifting communities around me, and that has yielded positive results. I was born to serve, and I will depart this earth happy.”